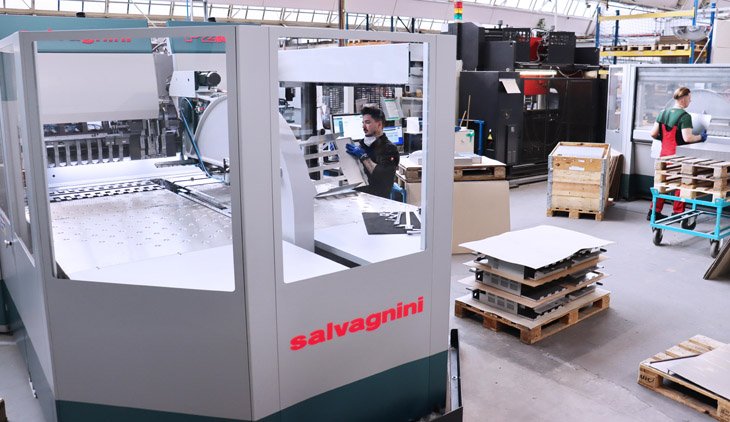 The year 2021 begins with new momentum and optimism at the BVS Group: many existing customers are significantly increasing their orders and a major project for a newly acquired customer will start in the coming months. In the wake of these promising business developments, the BVS Group teams have been busy installing a total of eight new machines and systems in the production halls. In the first quarter of 2021, a punch-laser combination machine, an automatic bending system, five welding cells with robots and a lathe were put into operation.

"To reflect the positive development of a business relationship, we decided to purchase another Salvagnini bending system," announces Harald Steiner, Managing Director of BVS Blechtechnik in Böblingen. The P2lean bending system is especially predestined for complex bending and large workpieces. With its universal bending tools, it adapts to the geometry of the panel during the cycle and enables changing productions. The upper and lower bending cheeks, the counterholder and hold-down are universal tools capable of handling the full range of materials and thicknesses, all at a fast 17 bends per minute (average). Since BVS Blechtechnik had already had good experience with the same model of Salvagnini machine for five years, the decision was clearly in favor of the Italian manufacturer. In addition, a second identical machine offers itself as a backup in the event of a shutdown, which reduces dependencies. Another pulse point is the user-friendly operation and the consistent quality of the bent products produced - the specialists at BVS already appreciate this about the existing plant.

In anticipation of a large order, a total of five TruArc Weld 1000 welding cells were ordered for the BVS Group and delivered in February and March. Harald Steiner goes into raptures when he talks about the welding cells: "We are more than taken with the fast conversion of welded parts and the outstanding welding quality of the Trumpf welding machines with robots". The speed at which a part is set up, programmed and finished in arc welding is ingenious. This is because, in alternating operation, the parts can be set up in the 2-station welding cell on one side while the robot welds on the other. The upcoming order, which involves processing approx. 4000 t of raw material, is so large that BVS Blechtechnik is receiving support from its own group of companies. For this purpose, two of the five welding cells have been set up at BVS Systemtechnik in Schwerin - with joint strength, the realization of the stainless steel welding assemblies is possible. At BVS Blechtechnik, they look back on 12 years of automated laser welding, but what is now possible with the extremely simple programming on the TruArc Weld 1000 is astonishing: using buttons on the welding torch, the skilled worker enters the welding start and end points directly. Then the robot arm is moved manually from waypoint to waypoint and the welding parameters and templates for welding programs are already stored.
Versatile sheet metal processing with new Trumpf TruMatic 6000 Fiber punch-laser combination machine

BVS has turned "old" into "new". After eleven years of operation, a punch-laser combination machine from Trumpf was replaced with a new TruMatic 6000 with fiber laser and stands for process reliability. "The thin sheet machine with solid-state laser guarantees high efficiency in steel, aluminum or in materials such as copper or brass. It is therefore the ideal system for processing increased orders based on non-ferrous metals," explains Harald Steiner. The wide range of uses for cutting complicated contours by laser or for standard contours as well as countersinking and forming, produced by the punching head, was the reason for reacquiring a combination machine. While the old TruMatic was equipped with a CO2 laser, the new TruMatic 6000 now has a fiber laser. With cutting speeds of up to 34 m/min, the punch-laser combination machine is highly productive.
On top of that, the new TruMatic 6000 Fiber has an excellent energy balance, saving about 47% in energy compared to its predecessor machine. Incidentally, the "green" electricity used at BVS comes from renewable energy sources. Together, these are important components for BVS' goal of sustainable production.
With the fully automatic connection to the material store, the SheetMaster continuously loads the machine and ensures fast and process-safe loading and unloading. Of course, the ToolMaster, an automatic tool changer, is also one of the clever solutions for fast handling of the many special tools with which the machine is equipped at BVS.

It is also worth mentioning the installation of a new GDW lathe in the area of BVS's own workshop. On the modern lathe, bolts can be turned and small parts created at up to 3000 revolutions/minute. It is thus not only used for the maintenance of the BVS machine park, but is also involved in the production of customer parts.

The employees of the BVS Group are looking forward to implementing the new projects and to the trust placed in them by existing and new business partners. Their many years of experience in the production of sheet metal parts, sheet metal housings and assembled terminal equipment on a total of around 70 machines, at BVS Blechtechnik and BVS Systemtechnik, stands for high-quality and efficient sheet metal processing for industrial applications.