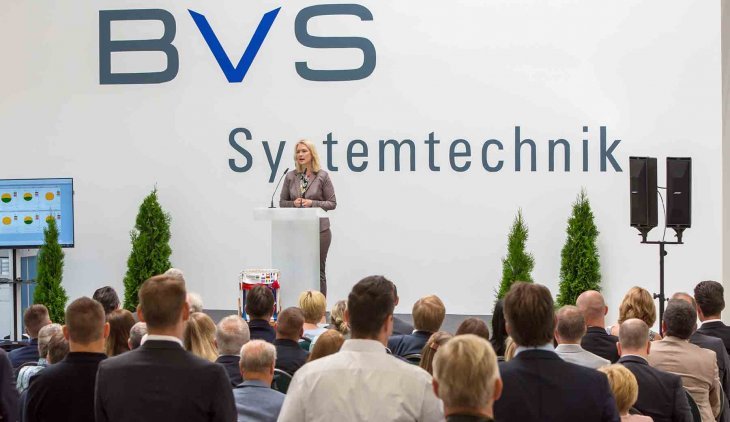 In the beginning of October the partners of the newly founded BVS Systemtechnik celebrated the topping out ceremony of the new factory with guests from world of politics and business. 25 skilled employees will produce sheet metal products for engineering usage from next spring in Schwerin.

The prime minister of Mecklenburg-Vorpommern, Manuela Schwesig, was pleased about the development of a new employer in the region. “With BVS Systemtechnik another company sets up a plant and we arrive at 1.000 jobs here in the industrial area Schwerin. Not only space for investments is existing, Schwerin has also a lot of skilled personnel”, emphasized the head of government.
The new team of BVS Systemtechnik will manufacture prototypes as well as sheet metal products for various industries in the future. “We are positioning BVS Systemtechnik broadly. New projects for the electrical industry or the production of vending machines are scheduled in the factory in Schwerin”, Harald Steiner, Managing Director of BVS Systemtechnik, reported.
BVS Systemtechnik, a subsidiary of BVS Blechtechnik, will focus on new customers in Northern Germany and will take orders of existing business of the parent company as an ‘extended workbench’. Moreover BVS Systemtechnik will deliver center consoles for aircraft seats to ZIM Flugsitz, which is also located in the industrial area of Schwerin.
An invested amount of € 8 Mio. was spend for the new building and an equipment of high-tech machines. On an area of around 4.000 m² laser punching machines, bending machines, a grinding machine, riveting and assembly working places will be installed. Due to the support of the Department of Trade and Industry, the city council and the Developmet Fund Invest in Mecklenburg-Vorpommern the expansion of BVS processes smoothly and efficient in the northeastern state.