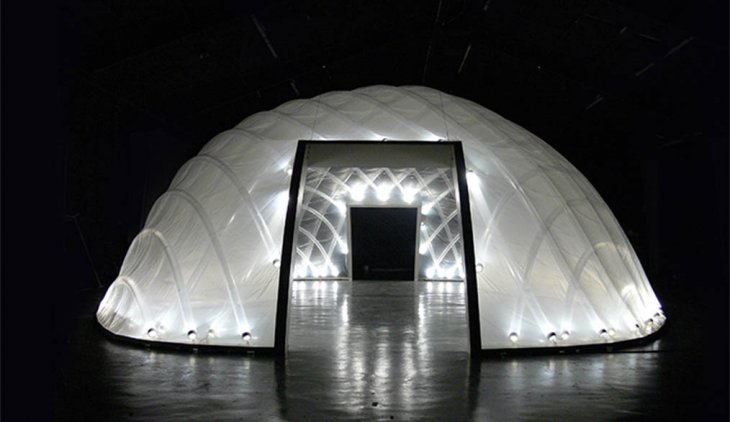 12 cm long stainless steel struts made in Böblingen were installed by Studio LTA in a futuristic lightweight construction for a film set of the Hollywood thriller Self/Less. The esthetic looking domes are playing a major role in the film. Pure, futuristic and innovative the film set of the latest Hollywood thriller Self/Less should look like. With a lightweight concept of the Stuttgart Studio LTA, consisting of pneumatic grid shells this was well done. Due to a student work at Stuttgart University the studio came to the attention of the film team. Thereupon the Studio for lightweight and temporarily architecture ordered at BVS Blechtechnik struts points.

A total of 200 stainless steel supports consisting of four single parts were produced by BVS Blechtechnik at state of the art laser cutting and bending machines and were delivered to be assembled in Stuttgart. Within only three months two air-supported domes have been produced which were installed at the film set in New Orleans by Studio LTA. Air-supported membranes build a grid, where the final points carry supply lines for electricity and air. These final points embody the stainless steel supports manufactured by BVS Blechtechnik.
The sience fiction thriller film directed by Tarsem Singh was released in August in Germany.